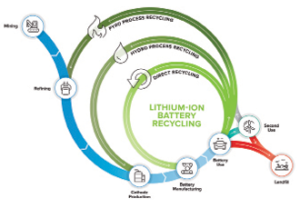 Not much question about it – electric vehicles are likely to take over the market. The important question is when this will happen. Regardless of the timing, at end of life (EOL), which is eight to 10 years or more after introduction to the market, electric vehicle (EV) batteries need to be properly managed.

Electric vehicles generally include hybrids, plug-in hybrids (PHEVs) and pure battery electric vehicles (BEVs). These vehicles use batteries that range in weight and chemistry. Most hybrids use a nickel metal hydride (NiMH) chemistry and weigh about 100 kg, while PHEVs and BEVs need a lithium-ion battery. A BEV such as a Tesla uses a lithium-ion battery that can weigh up to 470 kg.

This makes EV batteries challenging, and in fact dangerous, to handle at end of life, because they are very heavy, and cannot be lifted and moved without specialized equipment. More importantly, they retain a significant charge, which can seriously injure a worker who has not received sufficient training on proper management.

The cost of EVs is expected to fall as the cost of the EV battery (which makes up a third of the vehicle cost) continues to drop. It is predicted by 2022 the EV version will cheaper to buy than its internal combustion engine counterpart. With much lower operating costs than traditional vehicles, EVs will slowly penetrate the Canadian and US marketplaces.

All vehicle OEMs are developing many EV options and investing heavily in EV battery technology. Part of the push is from China, which requires at least 10 percent of vehicles from any OEM selling more than 30,000 vehicles into Chinese market to be EVs, with the percentage growing in future years. For a company like Volkswagen AG (which owns Audi – see sidebar, page 20), with 40 percent of its sales in China, this has required a significant investment in EV technology.

About 690,000 EVs were sold in the U.S. in 2018 (327,000 hybrids, 122,000 plug-in hybrids, and 239,000 BEVs), and these numbers are expected to grow in future years, with projections varying widely. Projects suggest about eight percent or more of the auto sales in 2025 may be EVs. A study prepared for the American Petroleum Institute by Kelleher Environmental (with Millette Environmental and Gracestone) concludes that about 525,000 EV batteries will reach end of life by 2025 and over one million units will hit end of life by 2030. These figures are based on EV sales data from 2000 to 2018 and sales projections to 2023.

An April 2019 report by Propulsion Quebec suggests the number of EOL EV batteries in Canada could increase to between 140,000 and 210,000 by 2030. Options to manage these batteries at end of life include re-use and recycling. While recycling is getting a lot of attention these days, re-use is a better option, which extends the life of the EV batteries and cells.

Some Canadian companies, with varying levels of support from the federal government, are already exploring recycling options for EV batteries, but lots of opportunities remain, particularly in the EV battery re-use market. Now is the time for Canadian companies to get ahead of the curve while the numbers of EOL EV batteries are small.

Anecdotally, Canadian auto shredders tell us they are getting a few EV batteries now, but the numbers are beginning to grow. The metal shredders we spoke with say they store the batteries for a while until a good recycling or re-use option is available. 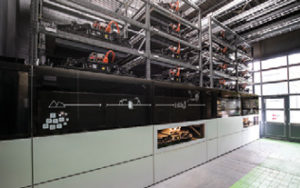 This installation is a demonstration project showing how end-of-life EV batteries can be reused for energy storage.

When an EV battery is no longer suitable for use in an EV, it still retains up to 80 percent of its charge and can be useful in many applications. Estimates of the additional lifespan that re-use applications could give to an EV battery range from five to 30 years.

Re-use applications for EOL EV batteries include both stationary and mobile options. These include applications that split the used EV into its constituent parts down to the cell or pack level, or where the unit is maintained intact with low-performing cells removed and replaced with new or reconditioned cells.

There are now a number of examples of second life applications for EV batteries initiated by either vehicle or battery OEMs, sometimes in partnership with utilities, research institutes or universities. These includes for example re-use in EVs (after battery pack and battery cell testing and evaluation) as a refurbished unit; re-use of cells or packs in other battery applications, such as drones, wheelchairs and other devices; residential energy storage or back up power; energy storage in renewable systems (e.g. wind and power); and, for EV charging.

Refurbishing EV batteries for re-use starts with partial disassembly of the battery pack. The next step involves testing the state of health (SOH) of each cell and pack and identification of cells that are no longer working, replacing them with other cells capable of holding a sufficient charge, and reassembling the battery pack, either in its original format or in a format suitable for the new application. This process involves diagnostic and screening tests to identify the EV battery chemistries and designs. Generally, each EV battery needs to be evaluated individually, because each one has been exposed to different charging and discharging conditions during its use in a vehicle.

Spiers New Technologies (SNT) of Oklahoma City is currently the largest company involved in EV battery re-use in the U.S. In addition to reconditioning batteries for clients such as Nissan, General Motors and Ford, SNT also uses EV batteries to construct a number of products such as “watt towers”, which are a smart energy storage solution that can be the primary power source for households and businesses.

BigBattery is another major player in the U.S. EV battery re-use business. With four facilities, spanning 240,000 square feet located in the US, Asia, and Europe, the company converts used EV batteries into new battery packs that are re-used in emergency, portable and solar applications to give power to homes in remote communities. In the US alone, BigBattery processes more than 470 megawatt hours of EV batteries.

No Canadian companies were identified to date that were involved in the EV battery re-use business but this is an opportunity that will be viable in the coming years as the flow of EV batteries increases.

Retriev (formerly Toxco) in Trail, British Columbia has been in the lithium-ion battery recycling business for over 35 years. Today, the focus is still mostly on lithium-based batteries. Retriev has had contracts with EV manufacturers for a number of years, and has disassembled, analyzed and processed over 90 different types of EV battery packs. Its current capacity is 4,500 tonnes per year.

The first step in Retriev’s hydrometallurgical recycling process is manual disassembly, where skilled technicians dismantle the pack and separate assembly pieces and circuitry from the actual battery cells. Separated cells are then fed via conveyor into a hammer mill crusher, which produces three types of materials: metal solids (copper, aluminum and cobalt), lithium brine slurry (dissolved electrolytes and lithium salts), and Li-ion fluff (mix of plastics and some steel).

The metal solids can all be used as raw materials in new products, while the slurry is passed through a filtering technology to produce a cobalt filter cake which is sold to primary-metal producers. The recycling efficiency rate throughout the process is estimated at 65 to 80 percent of the incoming battery weight.

Retriev provides customers with full reports on the time took to dismantle the battery, and also provides diagnostics on the SOH (state of health) of the battery cells.

Glencore, in Sudbury, Ontario has been involved in Li-ion battery recycling market for many years, mainly to recover cobalt and nickel. Due to the input feed size limitations of their rotary kiln, the company asks collectors to break batteries down into smaller components before they are introduced to the kiln/calciner for metals recovery in a pyrometallurgical process. The matte produced by the process is shipped to a Glencore facility in Norway for further processing.

Rather than preparing EV battery components to send to large smelters to recover metals such as nickel, manganese, copper and cobalt, a host of new players in the EV battery recycling market are trying to recover the cathode materials directly from the batteries and produce an end product with much higher value to sell directly to battery companies. This approach is called “cathode to cathode” or “direct” recycling.

Ontario-based Li-Cycle received a $2.7 million grant from Sustainable Development Technology Canada (SDTC) in 2018 to construct a demonstration facility in Kingston. It has two core components. The ‘spoke’ is a mechanical size-reduction technology capable of processing 5,000 tonnes of Li-ion batteries per year. It processes the recovered cathode and anode materials into a mixed product. The ‘hub’ consists of centralized hydrometallurgical plants that can process 365 tonnes per year of material, and produces end products like lithium, cobalt, nickel, and manganese that can be re-used in new battery production. The company claims its technology can recover 80 to 100 percent of all materials in lithium-ion batteries.

Li-Cycle announced in February 2020 that it would be establishing a commercial-scale 5,000 tonne per year Li-ion battery recycling facility in New York state. It is expected to be fully operational by the end of 2020 at a cost of US$23.3 million over three years.

Lithion is currently in the process of building a $12 million pilot factory in Montreal, which is slated to begin operations in 2020. The goal is to produce purified battery-grade materials –cobalt, graphite, nickel hydroxide, and manganese oxide – that can be used by battery manufacturers in the production of new batteries.

American Manganese Inc. in Surrey, British Columbia, recovers the cathode materials in Li-ion batteries using its patented five-stage RecycLiCo process. The company claims their process provides near 100 percent extraction of battery-grade-purity cathode materials with a minimum of processing steps. A pilot plant located in Richmond, B.C., is providing the company with data to optimize a planned three- to five-tonne per day commercial demonstration plant expected to be operational by late 2020.

Their ultimate goal is a 30- to 50-tonne per day recycling plant producing cathode precursor material that could be sold for use in the production of new Li-ion batteries. Funding from the National Research Council of Canada Industrial Research Assistance Program, will support collaboration between American Manganese and Battery Safety Solutions (BSS).

In November 2019 Neometals announced it had successfully recovered a very high purity (over 99.9 percent) nickel sulphate solution from the hydrometallurgical processing stage of its recycling technology. The pilot-test work currently being undertaken will supply the company with data for feasibility studies for a proposed commercial Li-ion battery recycling venture targeting greater than 90 percent recovery of battery materials. An investment decision on this plant is expected in December 2020.

In Canada, the EV battery re-use and recycling sectors are still underdeveloped, but a number of promising projects and technologies are currently being developed and slated for piloting or commercial development over the next few years. The recycling and re-purposing of EV batteries will not only prevent a huge burden on landfills, but will also help keep critical materials (such as cobalt, nickel, manganese and lithium) in productive use for as long as possible, a core element of the circular economy.