Three generations of the Weinstein family.

For four generations, the Weinstein family has been steadily expanding its capabilities to provide recycling services to the lower mainland of British Columbia. The company offers recycling and salvage of ferrous, non-ferrous metals, wire and copper along with a automotive motor-breaking service.

Founded by Isadore Weinstein in 1952, Allied Salvage Metals has evolved through several changes in location and equipment. Today, with facilities operating in the cities of Richmond and Squamish, Isadore’s great-grandson Ian Weinstein sees his growing fleet of equipment, which includes material handlers, baler/shears, cranes with grapples and magnets, forklifts, and skid steers among others, as an important turning point in the company’s history. He has been involved in the family business most of his life and now serves as director of operations alongside his father, Arthur.

The younger Weinstein recalls that the yard’s material handling needs were given to an old excavator, which was fitted with a boom & stick “that it could hardly handle”. Later, they added a log loader, modified to move scrap. He notes that there were some purpose-built material handlers on the market at the time, but with no dealers or parts inventories stocked in the region, service support proved to be a challenge.

Allied has occupied its current Richmond site location since 1991, starting with a small 1.25-acre property, later doubling it with the purchase of an adjacent property

Allied continued to grow steadily through the years. “We have a great crew that makes it happen; to keep the material moving,” Weinstein said. The increasing volumes processed and shipped through the yard drove expansion of the equipment fleet.

Moving up to “purpose-built” 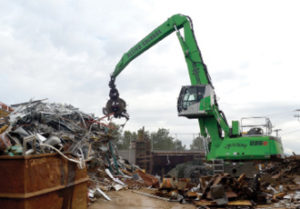 Finally, the Weinsteins were able to add their first Sennebogen purpose-built material handler in 2007. The next year, they acquired a Sierra 500 baler/shear. “That’s when we, as a company, really started to grow in ferrous production,” Weinstein said. “We were geared up for growth and our new equipment made it possible. The new Sennebogen gave us more speed, more capacity and higher piles in our tight surroundings and the ability to better organize our process.”

Now the fleet has now grown to five Sennebogen machines, including one unit working at the yard in Squamish. The workhorses in Allied ferrous operation are the company’s four 835 M rubber-tired models.

With the 835’s combination of mobility, load capacity and fast cycle times, Allied was also able to add another shear to its process: a Sierra T900 shear that can churn out as much as 26 tph. Still operating on a site with just two and a half acres to work in, Allied is moving 3,200 to 4,000 tons of ferrous per month, plus another 500,000 pounds of non-ferrous.

In the 12 years since Allied first began its move to a Sennebogen fleet, Weinstein has already retired and replaced two of its original green machines. Of the five units now in service, the oldest is approaching 25,000 hours service and another has over 15,000 hours.

“We have always bought machines to bring in additional capacity”, Weinstein explained. “As you can imagine, with our high need for production, downtime can be a killer. These days, replacing older equipment with new pays us back in throughput with reduced downtime and less maintenance cost. Our latest Sennebogen machine is the first time we traded in equipment instead of adding to the fleet.”

The strength of relationships

Ian Weinstein credits the Sennebogen support team with keeping his fleet productive. “Our dealer, Great West Equipment, has done a great job looking after us, being there for us,” he said. “They are a dependable parts supplier, and get strong back-up from Sennebogen in North Carolina. They have offered us a great amount of training onsite and we are planning to have our own technicians attend free sessions at the Sennebogen Training Center in Stanley.”

The strong connection with Great West reflects the family values at Allied.

Sennebogen, too, is one of today’s few family-owned OEMs. With 65 years of history behind it, the company specializes in building equipment for recycling and scrap metal yards, transfer stations and waste facilities across North America.

“As a 10-year customer, we have a great relationship with Sennebogen. We enjoy meeting them at events like ISRI. Sennebogen and Great West take our problems seriously; they get on top of it.”