One of our contributing editors forwarded me the link recently to an excellent article in The Guardian online profiling entrepreneur plastics recycler Mike Biddle, who recently departed international recycling company MBA Polymers.

The article is interesting on a number of levels, including as a profile of this businessman and the whole issue of plastic waste. (Biddle is quoted saying he estimates that 500 billion pounds of plastics are thrown away every year, and only a tiny fraction is recycled.)

What I found most interesting was seeing this dyed-in-the-wool free market proponent and libertarian conclude that the United States is a laggard among technologically-advanced countries in that, unlike many countries in Europe (say), the lack of extended producer responsibility (EPR) regulation has stymied investment in large-scale recycling activities for things like rigid plastics.

The problem is that large plants are expensive to build and, though MBA Polymers has the technology to convert a heterogeneous stream of plastic waste into a fairly uniform renewed plastic resource, the lack of any certainty of supply is discouraging investment in plants with such technology. In other words, if the United States had broad legislative requirements that these plastics be collected in a manufacturer-led and financed “closed loop” system, cradle-to-cradle plastics manufacturing would be the result on a massive scale, and these materials would be kept out of landfill or, as Biddle points out, out of shipments to developing nations where scavengers pull out the valuable materials (e.g., copper wire from electronic waste) and discard the rest (i.e., plastic) into the environment. It’s interesting that one of Biddle’s new roles is involvement with a philanthropy called Waste Free Oceans. The man clearly “gets it” that plastic discards are fogging the world’s oceans with toxic micro-waste and this needs to stop.

(As an aside, many people have a mistaken concept about what this plastic waste looks like. There are two main types. The first — which is what most people imagine — is comprised of floating items like soda bottles and tops, etc. that wash up on beaches, or that seabirds eat, mistaking them for small brightly coloured sea creatures, which leads to their death as their bellies become full of the stuff, leaving no space for real nutrients. You can watch the an excellent documentary on this on YouTube, via the link to the first of three parts here. This is bad enough, but it’s the other type of plastic waste that should worry us most. Over many years, plastic — the virtue of which is that it’s made up of molecules unknown in nature — breaks down, but not entirely. Given enough time, it eventually becomes a “cloud” of plastic material concentrated in the world’s ocean gyres. Imagine pieces of plastic as small as a grain of sand, or microscopic. The problem is that this microscopic material attracts and absorbs toxins, and concentrates them as much as 10,000 times background levels in nature. microscopic life forms attach themselves to these tiny plastic “rafts” and are then eaten by larger creatures, and so the toxins are biomagnified all the way up the food chain.)

It’s ironic and sad that the United States — one of the world’s largest economies and consumers of plastics and electronic equipment, etc. — is lagging many other countries in collecting plastic waste, recycling it and keeping it out of the world’s oceans and other environments. EPR is clearly a big part of the solution, but the US is miles away from getting such regulations and systems in place. Canada is only a little further ahead.

So, the Guardian article is here and below. Enjoy.

Mike Biddle: Why plastic is still ‘the last frontier’ of recycling

The former CEO discusses his frustration with the recycling movement, his hatred of waste and how the US can grow jobs
by Marc Gunther, theguardian.com
Wednesday 26 February 2014 15.00 GMT

This month, Mike Biddle, the founder and longtime CEO of a pioneering plastics-recycling company called MBA Polymers, stepped down as an executive at the firm, ending more than two decades of unrelenting effort to reduce plastic waste.

Biddle’s story is one of great success, as well as ongoing frustration. He sat down with me last week at the 2014 GreenBiz Forum in Phoenix to talk about MBA Polymers, the potential of the so-called circular economy, and why, despite all we know, the vast majority of plastics discarded in the US still wind up in incinerators, landfills or, worse, the ocean.

Plastics, he says, remains “the last frontier of recycling.”

Biddle, who is 58 and has a PhD in chemical engineering from Case Western and an MBA from Stanford, left a good job at Dow Chemical in 1992 in the hope of solving the difficult puzzle of plastics recycling. During the next seven years, he attracted about $7m in grants and loans from the state of California, the Environmental Protection Agency and a plastics industry trade group.

The money enabled him to develop a set of technologies needed to make high-quality plastic pellets – which can be used to make new products – from big, messy and mixed post-consumer waste streams, particularly electronic waste and junked automobiles. He calls it “above-ground mining.” (MBA Polymers doesn’t bother with PET plastics, the type used to make soda bottles, leaving that particular waste stream to the beverage industry.) 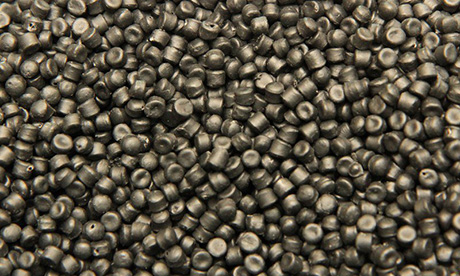 MBA Polymers turns hard-to-recycle post-consumer plastics – such as those found in electronic waste and junked automobiles – into high-quality pellets like these, which are, in turn, used to make new products. Photograph: MBA Polymers
Since raising its first round of venture capital in 1999, MBA Polymers has attracted more than $150m from investors. Its latest round was a Series H. Now, the company, headquartered in Richmond, California, operates recycling plants in China, Austria and in the former coal-mining town of Worksop in the UK, which together process more than 300m pounds of plastic waste per year. It also won a 2013 Katerva Award for the materials and resources category, announced today.The company has proven that the economics of plastics recycling can work, so long as there is an adequate supply of waste to be reprocessed. And closing the loop on plastics also delivers big environmental benefits. Recycling plastics not only keeps waste out of landfills and oceans, but also reduces the need for petroleum-based feedstocks, requires 80% less energy than making plastic from oil and dramatically reduces carbon emissions.Of all this, Biddle is justly proud. He considers himself an environmentalist, as well as an entrepreneur. “I absolutely hate waste,” he says.

But Biddle is disappointed that he has been unable to take the company further. He estimates that as much as 500bn pounds of plastics are thrown away every year, only a tiny fraction of which is captured by MBA Polymers.

He’s especially frustrated that the company isn’t operating in the US, the country that educated him and provided the seed money for his research. MBA Polymers employs about 300 people, and all but a handful of engineers work overseas. “I’d like to create jobs here,” he says. Biddle himself had been commuting to the UK.

Why can’t the company gain traction in the US? Building plants to reprocess plastics is expensive, and MBA Polymers cannot be sure it will get a large enough – and secure enough – supply of US plastic waste to justify the capital cost.

One way to secure a more predictable supply of e-waste would be to place some of the burden of collecting it on manufacturers. That’s what the EU has done. Its “extended producer responsibility” laws, which require electronics to be collected and recycled, have created a robust collection system for used cell phones, tablets, computers and other e-waste. “They primed the pump with policy,” Biddle says.

Besides that, Biddle would like to see the US follow other countries and require that e-waste exports to poor countries be handled responsibly. MBA Polymers cannot compete, he says, with cheap and irresponsible recyclers in places like China, Vietnam and West Africa.

“People, for as little as a dollar a day, dig through our stuff and extract what they can and leave behind what they can’t, which is mostly the plastics,” he says. “A lot of that winds up in rivers and oceans. … We need care about how we unmake our stuff as much as we do about it’s made.”

US recyclers, he says, could be required to audit the processing of the waste that they export. Today, “there’s no downstream accountability,” he says.

Biddle has testified in favor the regulation of e-waste exports before Congress. The stance didn’t come easily to him because, he told me, he’s believes in limited government and free markets. “But I can’t compete if the rules aren’t fair,” he says.

MBA Polymers may get a big assist from China, which last year announced a crackdown on hazardous waste imports called Operation Green Fence. “They’re trying clamp down as they should,” Biddle says, “but enforcement is not what it should be.”

Biddle isn’t giving up. Even though he has left MBA Polymers, he expects to keep working on recycling policy – despite his libertarian instincts. He plans to encourage businesses with access to waste streams, such as auto shredders, to recognize their value. And he has taken on a new job as president of Waste Free Oceans America, a new subsidiary of a global non-profit called Waste Free Oceans.